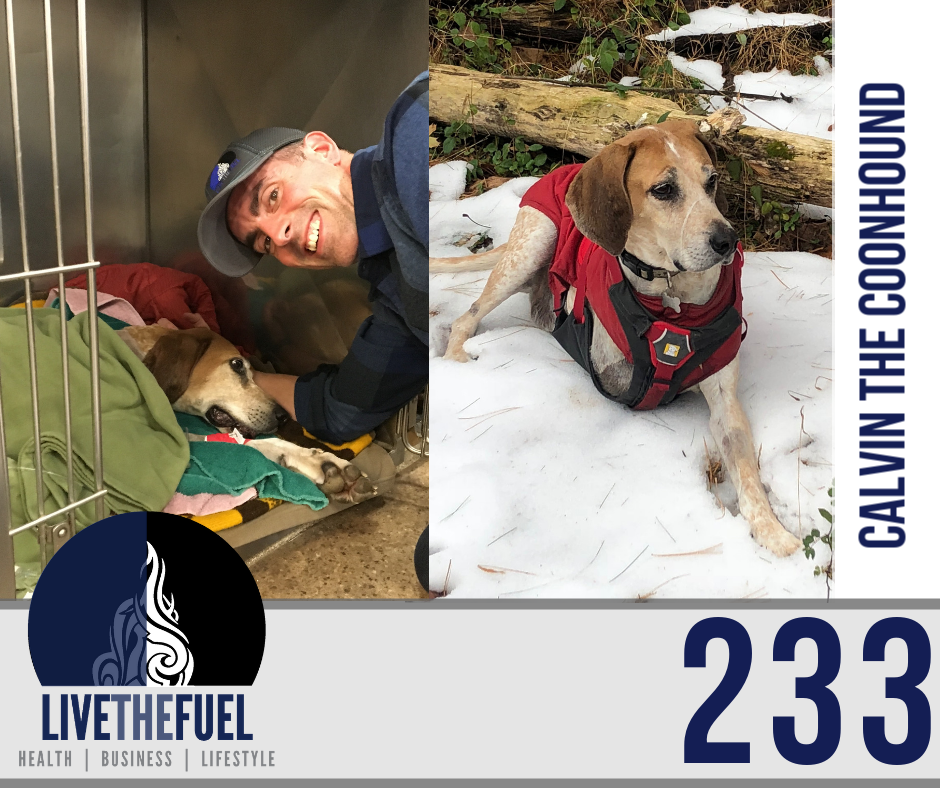 Tune in for a special holiday podcast catching you up on our ailing Calvin The Coonhound. Calvin is our English Redtick Coonhound, 10 years old, battled Cancer, became a tripod, and now has been battling partial renal failure from the tripod leg amputation surgery to save his life from Cancer. Listen in for my transparency and updates into our personal lives and love for Calvin.

<li>[spp-timestamp time=”00:30″] Introduction. This is a special edition, I decided that with the power of Thanksgiving here in the USA, I’d thought I’d break up our normal content and add in a couple of solo episodes, which are very few and far between on this show since founding in September 2016.</li>

<li>[spp-timestamp time=”00:53″] For the past eight years I’ve had the honor and privileged to be able to go up to the Harlem in northern New York City and there’s a strong population of less fortunate people. There’s a wonderful woman there by the name of Mary Lanning and she helps give back for the past 47 years making 2000+ meals, which this year we did 2500 hot meals going to the streets to give back. Go listen to that episode 232 to learn a little bit more. There was another powerful organization we got to work with on Wednesday before Thanksgiving, which was the Tunnel 2 Towers program. That’s an amazing organization giving back to people whether it be military, police, fire, first founders, etc. This whole program was started thanks to the Stephen Siller Foundation, which was named after a New York City fallen firefighter who died in the 911 World Trade Center Towers collapse. So again, check out Episode 232.</li>

<li>[spp-timestamp time=”02:35″] I think we should be good to our fellow man, no matter what day or week or month it is. But this episode is especially targeted to a very special member of our family, Calvin The Coonhound. That’s my dog, and not just my dog, it’s actually my fiancé’s dog. It was really her dog for five years before I met her and then the past five years that we’ve been building our relationship together. Obviously Calvin became, we’ll call it my son, as well, since we don’t have human children. Calvin is our child. I never would have called him that until the tragic experiences that we’ve been going through this past month.</li>

<li>I wanted to do a podcast to reflect on that because I think I underestimate sometimes the impact of people, individuals and yes, even animals on our lives. That’s what I wanted this episode to really do for you all, was to get you guys to pause and reflect. So I thought what the heck let me share some personal components out of my life for you all because isn’t that what podcasting is all about?! We should be getting more intimate, I should be letting you guys deeper into my life. I mean, over the past 200+ shows, I know I’ve definitely softened things up and let you guys in on my little romantic adventures and how basically my head was up by butt as I was fighting to fall in love with my now fiancé. So for those of you haven’t followed on social media, Calvin has not been having a good go the past couple months.</li>

<li>[spp-timestamp time=”04:46″] For the past few years he’s been an amazing companion I loved taking him mountain biking and Kristen my fiancé was worried that as he was getting older, I might be overworking him. I ride pretty fast as a mountain biker, I’ve done a few races over the years, I don’t like to go slow. So Calvin likes to run with me and he’s happy to get after it with me so that’s why he and I have our own special bond which is different than hers, ha-ha!</li>

<li>[spp-timestamp time=”05:38″] She took him to the park couple of months ago where he loves to be typical Calvin, he sprints across one of the baseball fields or soccer fields and he does this weird dipping of his shoulder and then just slides into the grass. Then he rolls over and just likes to rub his hair in the grass, it’s a dog thing. I sometimes I feel like as human beings we should take a page from their book and learn how simple life can be for happiness. So maybe next time its wintertime maybe when you’re in the snow, drop that shoulder and just roll around through the snow.</li>

<li>Anyway, he goes to do this and all of a sudden Kristen said he just let out this god awful YELP and did not want to get up. He’s a pretty tough dude. Now granted he’s as we’re recording this here in November 2018, a 10-year-old dog. So if this whole math in dog years is accurate, that is 70-years-old, supposedly it’s a seven to one ratio. So she was worried because he’s a 90-95 pound Coonhound and granted my fiancé does a lot of CrossFit, we lift a lot of weights and she’s a strong girl, but she was wasn’t if she was able to get them back to the car.</li>

<li>[spp-timestamp time=”08:27″] So yes, ladies and gentlemen, Calvin The Coonhound has Cancer. So this was a huge shock to us. I love to try and maintain that high energy, glass is half full. My fiancé, being the educated doctor, she is a bit of a realist. I guess you reach a point where you know too much and it’s really hard for her to battle that and fight the fact that it could be this bad. So she can’t stop thinking about that. Let me tell you the past month and a half, I was getting frustrated. My patience was pushed to the limits, at times, I had to catch myself, I thought I was being a little bit of a dick.</li>

<li>I just know too much just like she knows too much from the medical world. I know too much from the natural wellness, healthy energy, the Psychology front, etc. I’m just pushing her to understand that Calvin needs us to be 100% positive. I know things don’t look good. When people are not doing well it doesn’t pay to hang around them and then be the woe is me companion. Sorry guys, this is not how I roll, so I took this full speed ahead for Calvin. I don’t know if it helped him or not but obviously the Cancer was real.</li>

<li>[spp-timestamp time=”12:16″] We can always make more money, that’s a little business life lesson. If you’re looking for something else that will give you an excuse to work hard for your clients or for your customers, go spend the money because you’re going to want to get after it! So anyway, $3000 already invested into that orthoscopic and biopsy, we were going stay committed.</li>

<li>Calvin loves us, he gets fed better than I do sometimes. I pass him my grass fed steak. He’s more important, as our child, so anyway, let’s fast forward. We got labs coming back, we’re stressed out, and he’s on pain relievers now. I know those are not good for him. I’m anti-pharmaceutical, I’m anti-drug, we were trying herbal remedies too, and pain relieving oils just to try to cut back on any drugs. We tried it all man I mean, this is a major commitment.</li>

<li>[spp-timestamp time=”14:08″] We finally get the test back it does confirm that this cancer did not metastasize. We can move forward with amputation so the game plan is set and the only day they can give us that works as soon as possible is the day that Kristen is flying out of town to Kentucky for a Horse Event. So she was not looking forward to that.I take the day off from any business activities, I didn’t care, it was all about Calvin that day and back to lifestyle balance. Sometimes you got to unplug man, just focus on what matters. They took the leg, the shoulder, the scapula, everything, to make sure there’s no chance of any Cancer left behind. All to make him into a true tripod pup.</li>

<li>[spp-timestamp time=”15:27″] Fast forward to this recording time, he’s hobbling around like crazy but before I go full Fast Forward, he started having more problems. That’s right, I think we’re upwards of over $4000 now, probably closer to five, and that’s right, dollars US. Between the pharmaceuticals, the pain treatments, the IV treatments, the surgery, the earlier orthoscopic procedure, Calvin’s health has us committed.</li>

<li>We see this weird discoloration proceeding from the front of his body to the back of his body, down to his hind leg. We find out we should probably bring him back in and get some blood work done. Well sure enough now we’ve got renal failure on the list! So for those of you who don’t understand renal failure, renal relates to your urinary system, your bladder, and in this case, your kidneys. This is the system that helps remove toxins from the body. We tied this new issue to the pharmaceuticals, we just think he was getting too much due to all of his procedures.</li>

<li>[spp-timestamp time=”17:27″] I mean this is this is getting deep, Kristen’s not doing well. Her stress, her emotion is manifesting into me. I am I’m doing my best guys, I’m trying to stay positive. I’m trying to stay ahead of the front and you know I talked about on the show about how your mindset is everything. Life’s challenges are meant to test you, well let me tell you this test was blowing me away and I was not ready for it.</li>

<li>[spp-timestamp time=”18:07″] We pull out all the stops again. We started running IV treatments to hydrate him and help get fluids to start flushing the urinary and kidney system. We were just trying to help kick start the kidneys, hoping to reverse the supposedly irreversible renal failure. So now at that point it’s still not looking good. We do an update of blood panel, we get him back to the surgical center for the next two days. Running those IV’s with full 24-hour monitoring and updated blood work again.</li>

<li>[spp-timestamp time=”19:44″] Our new game plan, we’re doing IV’s a couple times a day and he’s going to be peeing his butt off but we got to help flush his system. We also try to see if this is going to help with us switching out and reducing his medications.</li>

<li>So let’s fast forward to Thanksgiving. I’ll just sum up, the blood work is reversing, it is slowly starting to climb and improve. It’s not perfect yet, he’s showing more energy, he’s going outside on his own. I’ve also built him his own handmade ramp, it’s in my Instagram history @scottwmulvaney. I literally built a massive wooden ramp with special carpet tiles and anti-skid taping on it. So now when you walk out the back of our house there’s no human steps, there’s a ramp to help him get into the yard. That’s right, I’m handy!</li>

<li>Part of that was a donation to the surgeon’s favorite zoo. The surgeon who did the procedure, this is the power of amazing people ladies and gentlemen, he does not like charging his fellow veterinary doctors for their own loved animals. So if he’s working on a major procedure like ours which should have cost us a hell of a lot more, he preferred to donate his time. That was a three hour procedure and he did not charge us, so we only paid for that day which was the veterinary facility. A shout out to Dr. Guy DeNardo and PennRidge Veterinary in Perkasie, PA!</li>

I wanted to dedicate this episode to Calvin The Coonhound because he’s bouncing back and we’re not giving up!