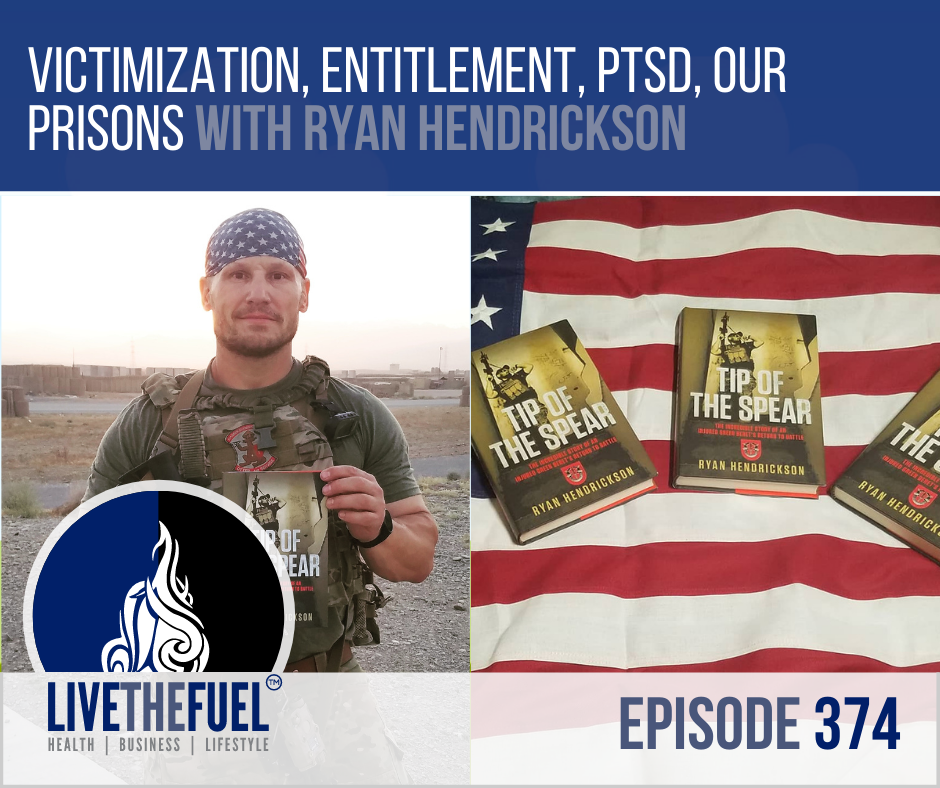 Ryan and scott dig deep into some hot topics around victimization, entitlement, ptsd, and his book, tip of the spear:

The inspiring true story of a US Special Forces soldier who was medically retired after stepping on an IED, and his incredible return to active duty and combat.

Sergeant First Class (SFC) Ryan Hendrickson is a determined, and courageous soldier — a Green Beret clearing the way for his twelve-man team while conducting combat operations against the Taliban. As the “tip of the spear,” his role is to ensure the route taken by U.S. and Afghan troops are free of IEDs — improvised explosive devices. Many soldiers do not survive their last step; those who do often lose at least one limb.

While rescuing an Afghan soldier outside a mud-hut compound in 2010 — knowing that he was in “uncleared” territory — Ryan stepped on an IED with his right foot. The device exploded, leaving his foot dangling at the end of his leg.

American soldiers losing a limb is an all-too-common occurrence. But what makes Ryan’s story different is that after undergoing two dozen surgeries and a tortuous rehabilitation, he was medically retired but fought to return to active duty. Multiple skin grafts to his leg and right foot successfully reattached his lower leg, and he was aided in his recovery by wearing a new prosthetic device known as an IDEO (Intrepid Dynamic Exoskeletal Orthosis). Once he passed a series of crucial physical tests, Ryan was able to rejoin the Green Berets within a year and physically perform his duties, redeploying to Afghanistan in March 2012.

In 2016, he volunteered to return to Afghanistan with Bravo Company, 2nd Battalion, 7th Special Forces Group. During a firefight with the Taliban, he risked his life under heavy enemy fire to rescue three Afghan soldiers cut off from friendly forces and return the bodies of two dead Afghan soldiers under the ethos that “no one gets left behind.” For his heroic efforts on the battlefield, SFC Ryan Hendrickson was awarded a Silver Star, the nation’s third-highest award for valor.

An engaging and harrowing account, Tip of the Spear tells the amazing story of one Green Beret’s indomitable spirit.

09:50 – Yes, well, overmanned career fields in the Air Force. They were doing a direct transfer over to the army if you wanted to, and I was going through a very big change in my life, the divorce and I just, I escaped. Yeah, went to the recruiter and went infantry and just went to my house and locked the door and shut the lights off.

20:00 – So it was kinda, I guess kind of the place that I was at when I actually opened up my keyboard and, or my laptop and started typing was, it was weird because when I went back and kind of read what I had wrote, I couldn’t believe like I was pouring that kind of stuff out and I was jumping all over the place. From what I dealt with what just incidents in Afghanistan to, then I would wake up at night, and oh, man, let me it was like my body was forcing out all this shit that bothered me all the way back from when I was a kid to you name it. And I would just type it in typing and typing and type it in.

30:00 – Because see, we got to have, in my opinion, just my opinion alone, we have an issue with victimization. And America. I see it everywhere. Everyone’s a victim, I can’t because of this, I can’t because I grew up like this. I can’t because this is handed this isn’t and we have entitlement. I am owed this. I am. So I deserve. And we have all of this. And my, in basically in the book, it details out my, my falling into the victimization mindset into that pit, barely, barely climbing myself out of the pit taking control of my life again, owning my circumstances is not because, you know, I grew up dirt poor, it’s not because you know, I stepped on an IED, or any of the number of things that happen. Those are all those are all just speed bumps in life.

40:00 – It’s because you grew up like this, this isn’t your fault, or no, no, it’s, it’s okay. You’re just, you’re because you’re part of this group, or you’re part of this group or you grew up like this or you are, it’s okay. It’s not your fault is bullshit, like accountability, we have lost 100%, we have lost the ability to hold ourselves accountable for our own mistakes. It is always somebody else’s fault. It is always, I mean, we’re going through it right now. And I’m not going to get political on here. But watch the news.

50:00 – So in my opinion, PTSD is real. It definitely is and there are people that suffer from it. You don’t have to be a soldier to suffer from it. A lot of traumatic incidents out there. But PTSD is so publicized now, that it’s almost like it feeds into more PTSD cases. That’s just my opinion, I’m not necessarily saying people are faking it. What I’m saying is, is that people maybe have some sort of issues with natural life, like, Hey, man, I have issues with the Humvee that blew up in front of me.

My biggest message that I have is remember Victimization and choosing to be a victim of circumstances is, again, I just said it’s a choice. You don’t have to live that way you can control the way you think and the way things affect you. And definitely it is a prison. But again, it’s the only prison in the world that you can willfully leave whenever you’re ready to. But I highly, highly recommend, you know, don’t fall into that mindset, into that pit, into that trap of victimization, because you don’t have to, but it’s very hard to get out of once you’re in.