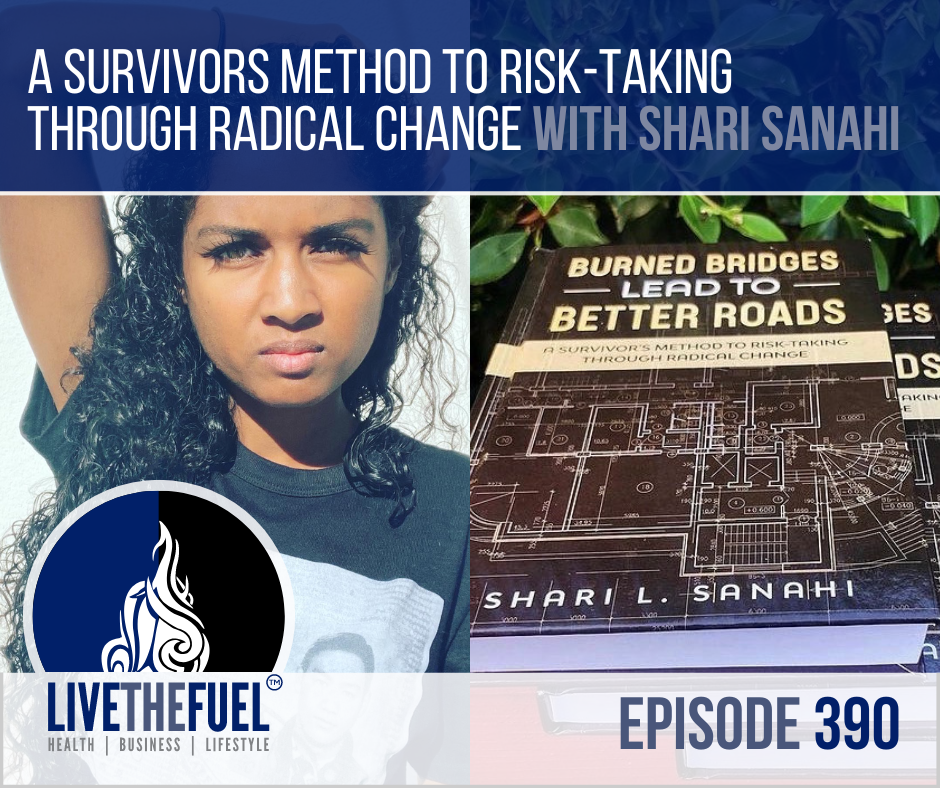 Shari Sanahi is the author of the book, “Burned Bridges Leads To Better Roads: A Survivor’s Method To Risk-Taking Through Radical Change.”

Shari is a first-generation Guyanese-American author born in Atlantic City, New Jersey, and currently resides in Los Angeles, California. She has spent most of her life teaching others about Guyana’s location and culture to those who cross her path. Guyana, a country located in South America, is comprised of 6 different races: Indigenous, East Indian, African, Portuguese, European and Chinese.

She was published in the zine from New Zealand titled “Phantom Billstickers, which can be purchased on Amazon.

SPECIAL Timing Note: We originally recorded this episode in October 2021. Thank you in advance as we catch up on episode releases since our host, Scott Mulvaney, started returning from his time off to finish writing and self-publishing his inspirational first book, “So You Want To Be A Hotshot” on Amazon.

Shari obtained a B.A. in Biology from Stockton University in 2011. In 2008, she took on an immense love for boxing and padwork training. In 2012, Shari began her training at Commando Krav Maga and Diamond Mixed Martial Arts Academy, a Muay Thai, Krav Maga, and Jiu-Jitsu studio located in Philadelphia.
When she moved to Los Angeles, she later became a boxing instructor at Title Boxing. Before taking an initial cross country road trip which she completed in 3 days, Shari obtained her 200-hour Power Yoga certification from Grace and Glory Yoga, located in New Jersey, in 2017.

After getting an initial taste of Los Angeles, she fell so in-love with the city that she decided to take a one-way-flight with no set place to stay to truly find her way after taking a break for one month. This journey had to be undertaken to complete her first book, which would lay the groundwork and foundation she had been searching for all of her life. Trauma and a difficult upbringing created a pretty unsteady foundation. Her recently published book creates a road map that got her onto better roads, and she hopes to help people from all walks of life walk on better roads as a result of reading her book.

Along with yoga and boxing, she was able to complete two 10-day Vipassana meditation retreats at S.N. Goenka’s meditation center in Shelburne Falls, MA. These modalities helped her to understand the importance of discipline that helped to create this book, and also were modalities which helped her to heal emotionally and physically.

06:50 – I took the gift of being all or nothing to say, you know what, it’s not a bad trait. It’s not some people call you got to be more great or, you’re too black and white. It’s don’t throw the baby out with the bathwater, all these different things, but some people you have, there’s a certain wiring for a reason.

23:00 – Oh, from the outside looking in, or I’m very much the same. I like real, because I’ve been through so much in my life. So what I like to hear those stories of like rags to riches or so for me, it’s a viewer. I also like to know what made people tick, because how could you, how can I put this I myself, but I’m doing things I don’t want to be upset about stuff. I want to be like, it’s music, it’s with movies, like I want something real and passionate. Whoa, that was so heavy. You can’t fake that. So it’s feeling and seeing how I feel, just because it’s how I really felt some type of way to write the book.

31:30 – I’m gonna give you a very surface fact. So at 12 years old, I was already smoking cigarettes, at 13 years old I was already drinking and liked going and hanging out with friends.  You know, going into parents liquor cabinets, and let’s take this gin, blah-blah-blah. At 14 years old, okay, this person or not found marijuana, so we’re gonna smoke formaldehyde too.

42:35 – What are you willing to suffer? I was willing to, I rather suffered. We all have pain, right? I say some choose to suffer for greatness and some people choose to suffer because they feel great. This is escape. So I said, listen, this thing’s gonna hurt. I don’t know what the hell I’m doing. I don’t know how I’m going to figure it out. But I would rather suffer this pain. That’s where the risk taking comes in, no risk, no story, no all-in, no story.

Well, it’s like I said, it’s just one step at a time realizing that everybody’s on different timelines. Regardless of where you were on your journey, it’s just everybody goes through the phase to see beyond the surface. So people see me too, okay. So you just happen to be right there. So seeing beyond the surface, understanding that we’re all connected, we all have a brain and a heart, we’ve all been through things. But you don’t have to stick their turn, the trauma worked through, I gave a lot of tools in the book to work through to turn that coal into a diamond.

Then maybe it’s on an author, maybe it’s it’s a singer, maybe you’re a CEO of your own company, whatever it is, there’s so many different dynamics as to how to convert that diamond. But you just have to keep working and you can’t let hard work scare you. You just got to know that it’s really not about the level of intelligence, it’s about how bad do you want something? How bad do you want to change your life? You really have to be sold on that idea. Like, if I give up, is the regret of giving up worth it? Wondering what could have been if I don’t do this work.

You know, like I mentioned, I stopped drinking for four years, clearly this way of life isn’t serving me anymore. I said, if I don’t do this, if I don’t make the sacrifice, what’s the other reality going to look like? What’s that going to make me stuck with? There is a level of dramatics with it. But you have to feel that I wasn’t a cold hearted person writing, I had to feel a level of discomfort and I’m tired of this entirety this way. I had to feel to the depths of my beat with every fiber of my being and wouldn’t that when you don’t drink, you’re going to feel and it’s not always going to feel nice, you know, especially with my history and things like that.

But I was like, you know what, I would rather endure this pain than that kind of pain, that’s picking pains. What’s your pain point? Then saying and realizing that there’s never mistakes, there’s just lessons and to just keep having faith in yourself. Knowing that there’s a greater picture, the details are one thing like all the evidence that we both got to do. Those are the little details, but keep going back to all of that little stuff to get to the bigger picture. Who are you helping before you leave this world? Whose life can you change before you leave this world? What do you know and how can you show somebody? What could really be done? Maybe they don’t have anybody else that can bring that out of them? That’s what it’s about.