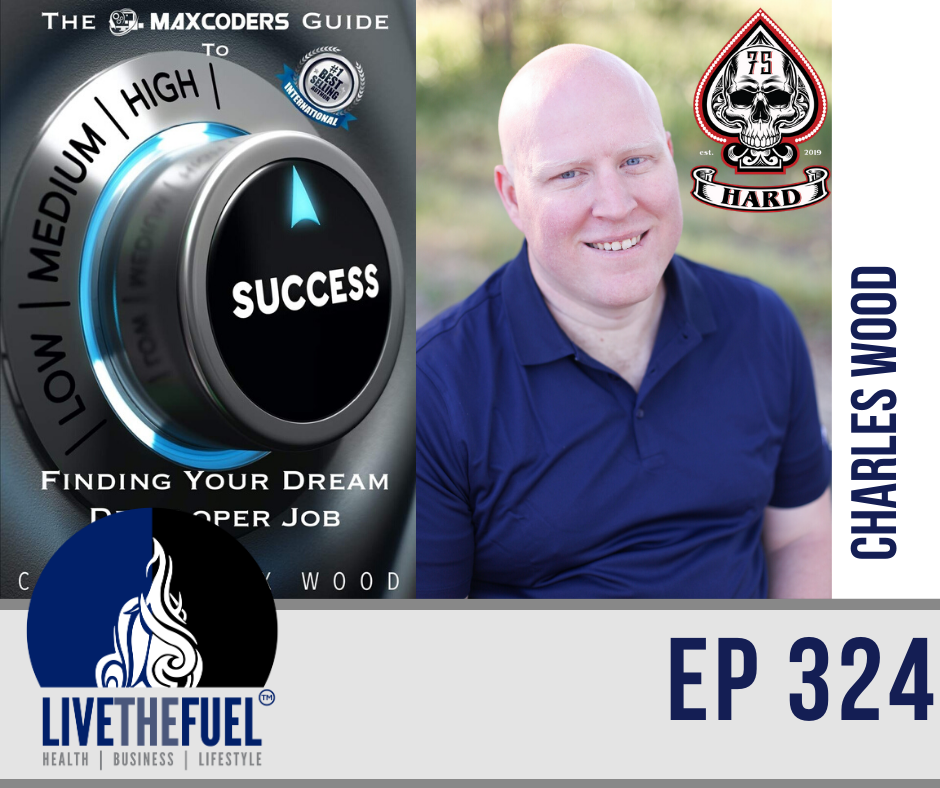 Charles Max Wood is the host of several podcasts including JavaScript Jabber and Ruby Rogues all available at Devchat.tv. He’s the author of “The MaxCoders Guide to Finding Your Dream Developer Job.” He started podcasting in 2008. The podcasts he produces reach more than 80,000 developers every week. Chuck lives in Utah with his wife and 5 children.

14:50 – I typically get the airfare and hotel covered. I wind up paying for the food for events.

19:00 – Yes and no, the part that’s the no is the fact that it involves effort, right? It’s easy to say, and it’s hard to do. Sometimes you really don’t know what the right thing to do is? For example, I got a blister, but I’m not an expert. There are other experts out there that I can go talk to, there are solutions. There are ways to figure out what’s going on. If you’re in an industry like podcasting, it’s still pretty young. So sometimes there are people out there and sometimes there is nobody out there.

21:00 – Marathon training. At one point, my wife was frustrated because I went running at a time she wanted me to be doing something else. So we had a conversation about it. She’s like, yeah, you need to keep running. So we worked it out. So then I was running longer and longer, my Saturday was running 16 miles. So then I did it and I completed the marathon.

25:00 – So let’s look at the book, right? I’ve been talking about it. Do I get the book do I not? What’s gonna happen? I finally said you know what, if I put some money behind it, it’ll force me to do something with it. That was my switch flip for me.

28:00 – You also did something a little crazy beforehand to get yourself ready for the marathon. Something called 75 hard. It was pretty viral online. Your journey on the 75 Hard was not easy. Yeah, I think all told I did like 120 Hard after the restarts.

34:03 – I had a month and a half’s worth of money in the bank. I just told my wife, look, if we run out of money and we can’t pay the mortgage, then I’ll go take a job. I’ll do a job search simultaneous with my client search and it just worked out. We never ran out of money.

40:00 – I don’t know why I didn’t do it sooner, but eventually, I got around to changing my tweet to If you’re finding me for the first time, go listen to the podcasts. At that point, the other thing that had happened was all of my defenders came out. So when things first went down, I had a few people come to me privately and say, look, I’m with you, but I can’t get involved.

50:00 – In this case, being quiet was actually the right course of action. A lot of these other folks came out, but it also made me feel better because I realized that I had all these people in my corner? I wasn’t alone dealing with this, which made a big difference too.

So I’ve kind of been joking that I kind of accidentally found my way into podcasting, and I kind of accidentally found my way into being a software developer too. But what it really boiled down to was I found the things that I really, naturally enjoyed and felt like I could succeed at. I guess if there’s just one thought over the last, what 13-14 years that I’ve been either programming or podcasting is that every time I try and do something that’s not who I am, you know whether it’s not standing up for something I believe in or not going after something that I really want, or not trying to build something that matters. I’m not happy, right?

So if there’s one real message that I can put out there to people, it’s hey, go out there and take a chance on the thing that you love. See if you can make it work. Because in a lot of cases, what happens is, you take a couple of steps into the darkness, and then you realize there’s a whole path leading up the mountain to where you want to end up

I don’t know if that works for everybody. But it seems like most of the people that do extraordinary things, that’s kind of where they end up, they find that place where they belong, they find that thing that really lights up their spirit. Then they go and do it. They stay true to themselves while they do it, and it pays off. I don’t know how to put that more eloquently. But that’s kind of where I’m at.

Join our private Facebook community The FUEL Tank, at https://www.facebook.com/groups/TheFUELTank/