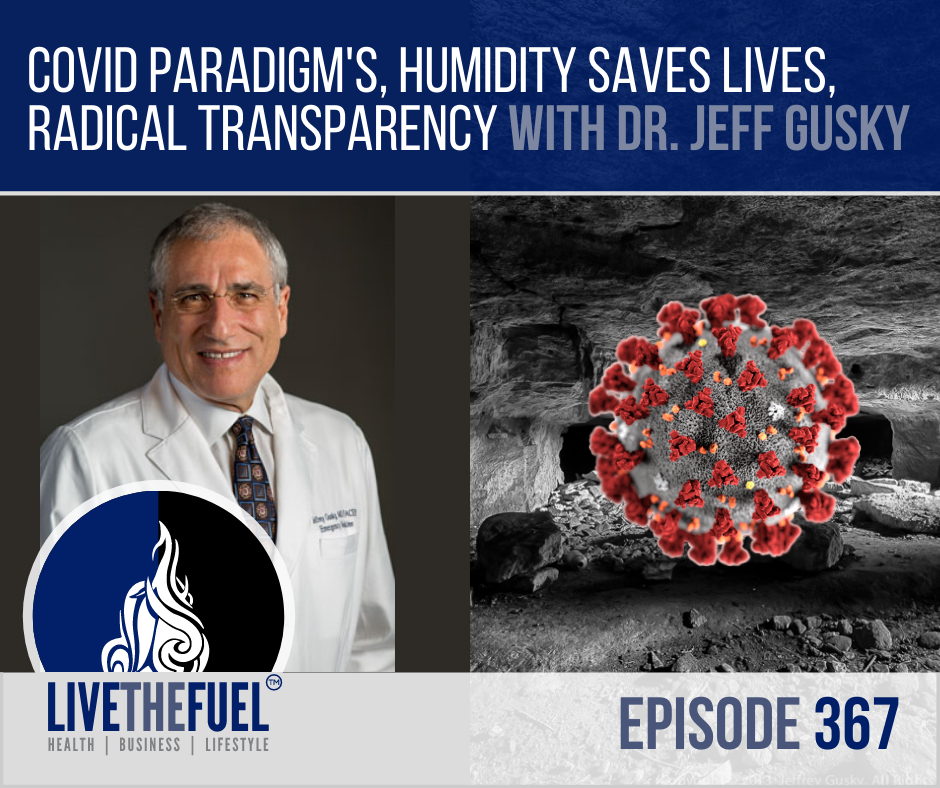 Jeff Gusky, MD FACEP is a Board-Certified Emergency Physician now on the front lines against COVID-19. Dr. Gusky is talking about critical pieces of the COVID puzzle and what will be needed after the crisis, that no one is yet speaking about. Jeff is focused on giving people some realistic and practical things they can do now that will help keep their view of the future positive.
Dr. Gusky is also a renowned National Geographic Photographer and Explorer. His discoveries and photographs are featured at The Smithsonian National Museum of African American History & Culture. He found a secret hidden for a hundred years that changes the way we see race in America and the way we heal ourselves.

Quote: When crisis turns our world upside down, paradigm shifts that restore what’s humanly safe and humanly real are critical.

SPECIAL NOTE: This podcast recording was accomplished on June 8, 2020, and streamed LIVE on our Facebook page like we do with all podcasts, realtime. – https://fb.watch/3OsaVEtcFT/

10:00 –  World War Bunkers. This is a place that still exists and they still find human bones from 102 years ago. It’s so surreal that you still have remnants from so long ago because the magnitude of mass destruction is beyond human comprehension when you have millions and millions of people that die in this kind of narrow, 450-mile line called the Western Front. So seven miles north of there, and I didn’t, or did I know it at the time, I didn’t know a whole lot about what I’m going to share with you now. So seven and a half miles north. This is a very important place out in the middle of nowhere in a farm field, which is sacred ground for America. This is one of the two parts of the Smithsonian show that I’m now part of, at the Smithsonian National Museum of African American History and Culture. So I’m honored to participate in a second Smithsonian show, and it will be up through September 6, 2020, if anyone’s in DC. It’s the big new Smithsonian Museum near the White House and they took out Oprah’s exhibit and put this exhibit in, its’ place.

19:30 – I don’t know if I’ll ever find any more. But it shows us how these heroes felt about themselves and there was a reverence between the white officers and the African American soldiers. It’s the opposite of what you would think from a racist South Carolina deep south. Even after the war for 10 years or more, they had reunions and you see letters back and forth and you see respect and love and a passion for this moment in time where they expressed what it was to be an American.

28:00 – So now here’s the really interesting part that puts it all together. Why? In fact, when we were talking before the show, you mentioned history repeats itself and people often say this. I say, well, yes and no, because this is not history repeating itself. It’s new, in the last 125 years, it sounds like it’s an underlying principle that, I guess, has been able to keep going. It’s a technology story. We all can relate to how our lives and society have changed so drastically, because of the exponential increase of scale of communication with Google smartphones, and social media.

31:00 – What is America? It’s a place where we all can agree and disagree with each other. It’s basically being different without killing each other. It’s not about loving each other or even liking each other. It’s about defending the right of someone you cannot stand to be who they are, even with your life. That’s what America is, in my view. That’s what brings out all of the altruism and decency, because when that happens, society-wide, you enable the greatest human potential, and the ability to be free and to be who you are, and express yourself. You have that right, as an American, it’s imperfect. It was always imperfect, it will always be imperfect.

40:00 – If this is not paranoia, this is just human nature and checks and balances and what America is with transparency. So if you knew 102 years ago, there was a Supreme Court ruling written by Judge Oliver Wendell Holmes on free speech, and it was about shouting fire in a theater to create panic, was that allowed or not, and it wasn’t right, it was outlawed. So what you have now is a media that no one could have imagined that has become so powerful and so manipulative and so capable of creating myths that are totally untrue. They’re completely shameless about it, because there are no consequences for being shameless. So you cannot believe anything you hear today about COVID or very little you can hear. A perfect example was, and I don’t want to take too much time going on about this, but talking about hydroxychloroquine.

44:00 – So there is something called absolute humidity. It’s not the relative humidity, which is what is reported on the weather service and measured at home. It’s the actual amount of water in the air and you can listen to a Scientific American 60-Second Podcast, it’ll tell you from 2009 that we’ve been looking at the wrong thing all along. This knowledge is not new. Birx and Fauci should have known this as biologists. So the absolute humidity is directly correlated to indoor viral danger and if it’s a certain number outside, you can predict what the air will be inside. So what happens is that in every single hotspot, the air was dangerously dry indoors and in that condition, COVID spreads like wildfire.

50:00 – On the way up there, I have a special device to measure absolute humidity, this is a metric that’s key to viral safety indoors. I measured it in Terminal C at DFW terminal. DFW is one of the world’s largest airports, it’s a city under roof. The humidity in DFW’s Terminal C was better than the Cincinnati jail. It’s probably one of the safest places in the Dallas Fort Worth metroplex and no one knows it. Then I land in Cincinnati and measured the indoor air at the CVG Airport. It’s what Wuhan was at the worst in December when the viral bomb went off. This is A Tale of Two Cities if DFW Airport can make indoor air greener than any other place in the world. If they can make indoor air green, then I would venture a guess that it’s as easy as flipping a switch in many cases or resetting the dial so to speak.

Buy a $10 hygrometer on Amazon or Walmart, you can see a real-time readout of your indoor humidity. If you buy a cheap humidifier, I have a couple of my own, you can get them cheap on Amazon too. I put the hygrometer 10 or 15 feet away from the humidifier, you’re getting a real-time reading of the actual diluted air, you know what the humidity is out from the humidifier right? Do this 24-7 because at night is the time of greatest risk when your air in your lungs dries out. So I hope this has been helpful.

One last thing, it’s about the airline industry, I’m issuing a call to action to the airline industry. So we will never get green air in aircraft cabins. Sure, but guess what, you don’t need it. All of these draconian measures from the CDC about six-foot social distancing are not based on real science, they’re just creating fear-mongering. They’re creating this as a new normal of fear, which is not a new normal at all. So, what I’m saying is that one size does NOT fit all when it comes to COVID. Risks outdoors are different than indoor air. It turns out that pressurized air in an aircraft is much different than air in a nursing home because the air is constantly moving.

So I’ve asked many aviation and aircraft experts, editors, and chief of big publications, I was with the Vice President of Safety of one of the largest airlines in the world last Thursday too. Everyone answers the same answer to this question, do you know of a single case where a person gets on an airliner with COVID, like back in February coming out of China or Europe and infects a cluster of people on the airline? Have you heard of any cases, Scott? I haven’t been either. I think there’s a reason for it and I think that it turns out that aircraft cabins right now, for reasons we probably don’t completely understand, are probably the safest one of the safest places to be against COVID because the air is constantly moving. It’s designed to actually have a separation between one person sitting right next to another. They have HEPA filters that do a better job than N-100 masks at filtering out viral particles from the air with high turnover. So think about that, I hope that helps.