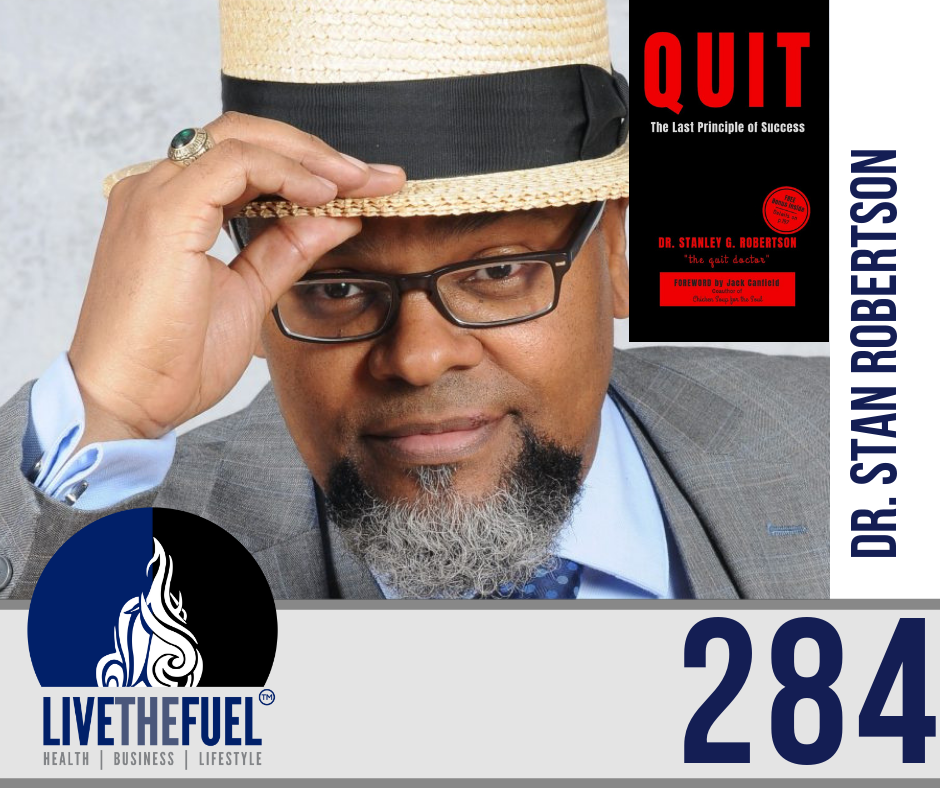 Succeed through the power of Quitting today, so let’s Quit Quickly!:

Dr. Stanley G. Robertson grew up in a project building on the south side of Chicago. He pleaded temporary insanity and joined the Marine Corps; then trained as a lawyer and earned a doctorate in business. Jack Canfield, the creator of Chicken Soup for the Soul, calls Dr. Stan the coolest person he knows; and predicts that Dr. Stan’s new book Quit will be a bestseller.

Dr. Stan has come to be known as “the quit doctor” because of his relentless determination to heal the world of the stigma and shame associated with the concept of quitting. He is an author, coach, and speaker.

A professional football player quit during halftime. A military commander quit his troops to be with his family. People who quit are often ridiculed and shamed because we are a hyper-performance-based society where “quit” is a dirty word.

But without the ability to quit, it is impossible to achieve success. No one knows this better than Dr. Stan. He quit the Marine Corps and earned a law degree, and quit being a thief and earned a doctorate.

There are countless situations of everyday individuals who struggle over the decision to quit because of the emotional stigma associated with the concept.

But the notion that “winners never quit” is a myth. The truth is that winners quit all the time. Michael Jordan quit baseball and won a 3-peat; Thomas Jefferson quit Great Britain and started America; The Rock quit wrestling and became an action star; Arnold Schwarzenegger quit being an action star and became a governor.

Dr. Stan has come to be known as “the quit doctor” because of his relentless determination to heal the world of the stigma and shame associated with the concept of quitting. He is an author, coach, and speaker.

[spp-tweet tweet=”It’s time to Quit quickly to succeed in Health, Business, and in Life with Dr. Stan Robertson! @livethefuel “]

There’s one thing and it relates to this concept of quitting and that is that one of the things that I encourage people to do is create for themselves a quick list. So a quick list is just something that you can commit to. It is for where things go that you can give up in your life that are no longer serving you. For example, you just decide that these don’t work for me or you don’t want to do it anymore, it’s a dead end. If it’s not giving you any good return for your investment, whatever the issue is, create this list and call it your quit list. Take that list to identify the areas in your life where you need to purge and then figure out what things you can give up to make yourself better so that you can get to your goals and your success a lot faster.